The Shift into higher consciousness is propelling today’s search for spirituality and meaning in life. Spiritual growth involves gaining a deeper sense of inner awareness. Deeper awareness ranges from light meditation to a complete and blissful union with your true, inner self.

We must believe. We must believe in our dreams, light, value, and strength. We are able to overcome because we believe. If we believe we have hope. If we have hope then we find a glimmer of light in the seemingly infinite darkness and as we follow the light we find our way back.

What is Spiritual growth?

Need help recognizing spiritual growth? Spiritual growth has become such an urgent issue today because everyone is under an unprecedented pressure to grow. They may not know that they are growing. They may resist it. They may be in denial that today’s great changes affect them. Nevertheless, these are the days of great change, an era called the Shift. The Shift is a steady rise in consciousness which is affecting the entire planet. It is similar to the cultural shift of the Renaissance, only amplified several times over. The Renaissance was merely a practice run for today’s transformation.

Exposure to the deeper states of meditation have the long-term effect of raising your everyday level of awareness. The higher the frequency of your consciousness, the more likely you are to see the synchronicity of events in your life and gain intuitive insights into these. The universal theme playing out on Earth today is shifting from one of separation to one of integration. Integration means learning how to love and accept yourself, and others, completely and unconditionally. 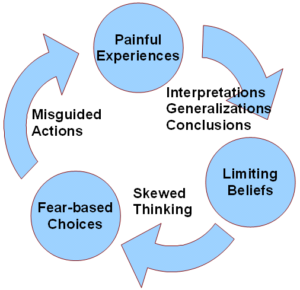 Deeper awareness opens the door to an inner sense of the connectedness of all life. You learn how to attain spiritual growth. You begin to see other people as different expressions of the same Infinite Being. Not better than, not less than, just different than yourself. In the deeper awareness of spiritual growth, the universe is seen to be within, not something separate and outside of yourself.

Inner integration is a process that causes issues of separation to arise so that they can be resolved. In society today, issues are coming up so rapidly that society appears to be in turmoil or chaos. This turmoil is actually a great society-wide healing, with issues becoming resolved one after another.

People are becoming more sensitive in many ways as the frequency of consciousness rises. The search for lighter diets is just one manifestation of this new lightness of being.

The physical senses are becoming more acute. An example of this is people’s sensitivity to the smell of cigarette smoke in work places and restaurants. Back in the 1970s, people smoked everywhere and very few noticed any discomfort from it. By the 1990s, however, the majority of people’s sensitivity had changed so much that they couldn’t wait to get smoking banned from indoor gathering places, and the sooner the better.

With the rise in consciousness comes a rise in personal empowerment. People are no longer willing to tolerate abuse or inequality in any form. Many forms of abuse which were traditionally ignored and tolerated have now come out into the public view for examination and reform.

David: Icon of the Renaissance. The Renaissance movement was inspired by the icon of Michelangelo’s statue of David. The statue portrays David, strong-willed and ready, at the moment that he decides to engage the threat posed by Goliath. This icon of personal empowerment resonated with the cultural shift of the time.

People wanted to explore their potential, taking personal initiative in their lives. Before this, they had seen life as a sequence of events caused by a pre-ordained destiny. Up until that time, people had resigned themselves to a pre-ordained flow of events which they saw as being outside of their control.

When people shifted towards the attitude that they might also be pre-ordained to take some personal initiative, then everything began to shift. Then the floodgates of possibility opened up as people began to explore their true potential.

In that same era, humanity on Earth still thought that their planet was the center of the universe. The Sun was seen as orbiting around the Earth, and the stars were merely a decorative backdrop in the Creator’s sky. Today, it is known that the universe measures billions of light years across, contains countless billions of galaxies, with each galaxy typically containing billions of suns.

The number of planets in the universe is so large that people find it hard to wrap their minds around such an expanded view of reality. All of those trillions of planets were created by the One Creator, so today there is a need to explore the concept of God in the light of this expanded awareness. Faced with such an expanded vision of the universe, how are people to grasp the concept of such a huge Creator in a way that makes sense today?

What would David have done? As he faced the looming Philistine giant Goliath and readied his slingshot, to whom did he pray? Did he invoke the power of an external God for his protection? Possibly, but not likely. As portrayed in the Michelangelo statue, his face was set, not with a need for protection, but in a defiance born of inner strength and determination.

Everyone possesses such inner strength. It is appropriate here to remember the lessons of the past, lessons from those days of frequent mortal combat. One of the great lessons was to realize the incredible inner strength that could unfold in the face of such mortal combat.

The advanced version of the lesson occurred when an individual decided that the cause was more important than themselves, and became willing to sacrifice their life for the greater good. Then, with the last shackles of personal caution released, the individual became like an invincible David.

Whether they physically survived the battle or passed away into the afterlife, they became permanently transformed in awe at the depth of the personal power that they had discovered within themselves.

The power is within you

Inner contact through meditation is the most peaceful, and the most productive, part of the day. Everyone deserves quality time. When you make quality time the first priority of the day, then regular meditation will happen and the benefits will be automatically yours. Put meditation at the top of your To Do list for each day and watch your spiritual growth unfold.

Intuition is a sense of instantaneous knowing that does not involve a linear, logical thought process. Intuition involves the use of senses other than the five typically considered the full range of human sensory perception. There are different theories about where intuitive information originates; some feel it comes from our own “higher selves”, others from God or another spirit source, and some believe intuitive information is accessed by connecting with a universal data bank of knowledge.

Living intuitively creates a sense of peace for the divine order of manifestation. You feel totally guided and cared for. It transforms doubts and shadows into trust. You listen for directions by paying attention to your voice of guidance and integrity. You learn to contact and communicate with different frequencies and dimensions. Seeing the physical world with love allows you to live with understanding and compassion.