Astral Projection is the process of temporarily separating your consciousness or spirit from your physical body. It is an extraordinary experience.

All who have experienced it can testify to its lucidity and magical quality. Astral Travel is very different from normal dreaming. In fact, it seems even more clear than our normal daily lives; our senses seem sharper and the environment somehow more real. There can be, however, astral projection dangers.

It is often thought that Astral Projection (Out-of-Body Experiences) is only experienced by people that have had a near death experience after an accident or on the operating table.

Astral projection has never been easier. Scientific evidence is now suggesting that we can leave our physical body and that we may even survive the death of that physical body. Using brainwave technology it was found that a certain combination of alpha and theta harmonics caused the immediate transference of consciousness away from the physical body.

Almost everyone trying these frequencies has agreed that the effect is very unusual. Several users have reported a distinct ‘moving’ of their perception from the physical body. It could take a lifetime to open the door to this inner journey, the Astral Projection frequency can do it in 10 minutes. 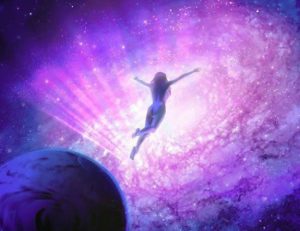 How does it work?

Accurately calibrated sine wave frequency generators were used to generate different frequencies in each ear. Experimenting through the whole range of alpha and theta waves (from 5 – 12 Hz) it was found that a combination of frequencies consistently caused a complete shift in consciousness.

This feeling was likened to all of your bodily awareness, suddenly being pulled into your pineal area (third eye). You can now recreate the effect for yourself by downloading the frequencies directly from the internet and minutes and works every time … without fail.

In astral projection the conscious mind leaves the physical body and moves into the astral body. The astral body is one of our subtle bodies.

Some people see the cord and others do not.You are aware of things you encounter along the way while out of your body.To astral project, as with all out-of-body experiences – one must feel totally relaxed, clothing fitting comfortable, reclining is best. Often a comforter is best over the body as the physical body sometimes gets cold when you travel out.

There are two general schools of thought on the nature of astral projection; these can broadly be defined as the mystical model and the phasing model.

The mystical model includes a large variety of belief systems and astral maps, but they are tied together by their belief that astral projection takes place outside of the actual physical body. A more subtle energy body is believed to carry the consciousness outside of the physical body, and as one progresses to more advanced levels of the astral plane, more subtle bodies are realized and consciousness is transferred in turn to each of them.

(Other mystical models assume only one subtle body.) The subtle body is attached to the physical body by means of an energetic connection which usually takes the appearance of a silver cord ‘plugging’ into the chakras like an umbilical cord.

The phasing model, which was defined by Robert Monroe, contains the belief that it is impossible to actually leave the body in the truest sense of the word, and that the astral planes and the physical world are merely points on the long spectrum of consciousness.

When a person projects, they actually “phase” into another area of consciousness and the locales it contains. This can be likened to tuning a radio to another station.

One of the initial signposts representing a phase shift away from physical reality has been labelled the state of focus 10 (mind awake/body asleep). This viewpoint can be seen as a logical progression of the philosophy that external reality is actually an internally created state (see postmodernism, Buddhism).

The traveler finds him- or herself in an apparently real domain, analogous to the “other worlds” experienced by traditional peoples, which have no parallel to any physical setting or to consensus reality, described by New Agers and occultists as the astral plane or the astral.

Environments here may range from populated to un-populated, artificial to natural to completely abstract environments and from beautific to horrific. Here, normal physical laws often do not apply and humans can often, for example, float or fly.

Quality of physical detail ranges from crude and un-detailed and depressing to bright, vivid and fascinating as detailed, among other writers, by Robert Bruce in his Astral Dynamics. Travellers may travel from one realm to the other. Projectors may find access to visions of the past or future and to the Akashic records accessible from here.

It’s been said that space and time don’t exist on the astral plane nor the higher planes – but no explanation is given as to how forms and entire environments can exist without spatial dimensions, nor why there can be a sequence of events and yet no such thing as time. Many travellers have theorized that people having actually travel to the astral realms, unaware, and, again as reported in Astral Dynamics, travelers have reported seeing dreamers enact dream scenarios on the astral plane, unaware of the more extensive and varied non-physical environment surrounding them.

In contrast to “astral” projection, the traditional understanding of out-of-body experiences involves the projector (or traveller) moving about in (usually invisible) or ghost-like form in mundane physical reality– the etheric body. This world may, however, have minor differences between the physical reality world we know if strict mind control is not maintained.

Practitioners sometimes refer to this practice as Real Time Projection (RTP) and the mundane world as the “Real Time Zone”, or “RTZ”, terms that were coined by Robert Bruce. From the Real Time Zone, travellers can access “the astral” or remain in the RTZ and witness Real Time happenings.

Many people confuse this phenomenon with astral travel, however etheric travel is mainly related to that which can and does exist, physically. During this type of experience, there are no fantastical words, or self-absorbed encounters; the majority of the experience can be validated. Dr. Charles Tart has done many experiments, which conclude that the person can not possibly invent the experience– unlike astral travel, where the experience is conceptual.

According to Arthur Powell and Max Heindel, the etheric “double” serves as a medium between the Astral and Physical realms. Ether, also called prana is the “vital force” that empowers the Physical forms in order for change to take place. This means that when one views the Physical during an OBE, they are not technically “in” the Astral Realm at all.

Part astral projection and part real time projection, called Virtual Reality Projection by most, is when a projector claims to move on the physical plane and interact with the astral plane at the same time. An example of this is the projector walking into a “real” poster or picture and being transported to a perfect reconstruction of this place/world, via the concentrated experiences and thoughts of every beholder of the concept of the picture.

Many of those who believe in astral projection also believe in a form more common to people with other abilities, such as clairvoyance. Bev Stayart Loses Yet Another Battle Against Levitra, Cialis And Search Engine Results They also tend to believe that the body can be seen by others, and almost always is. The projector (traveler) projects to somewhere else on the same plane of the same world. For example, someone in L.A. could astral project to someone in Hong Kong and converse with them, in reality and actuality.

In the Astral the sky is not the limit. One can fly way beyond the blue sky, into deep space exploring the planets. One can consciously project to any part of the world through concentration…

We can fly through the air, having a birds eye view of what is below, traveling across the surface of our huge planet…

Imagine being able to glide over the ocean like a seagull, or being able to penetrate into it and breathe beneath it like a fish…

We can meet enlightened beings, even of distant ancient traditions, which can help guide us along the Spiritual Path. Or we can even attend true esoteric schools and temples to learn much about the mysteries of life and death…

There are all sorts of hidden knowledge one can acquire through Astral Projection, knowledge that cannot be acquired in every day life, from other people or books.

This is the reason why many want to Astral Travel – to acquire knowledge through experience about ourselves, about the Earth, the Universe, or anything we want to. All of this is available to us through Astral Travel. It is something worth experiencing and verifying and it will certainly change your outlook on life for the better!

How will remote viewing help me?

Your ability to travel , in your mind, to your chosen location in space -time will be greatly improved and the accuracy of your imagery will be increased. With “Astral Projection frequencies”, you’ll quickly learn to: